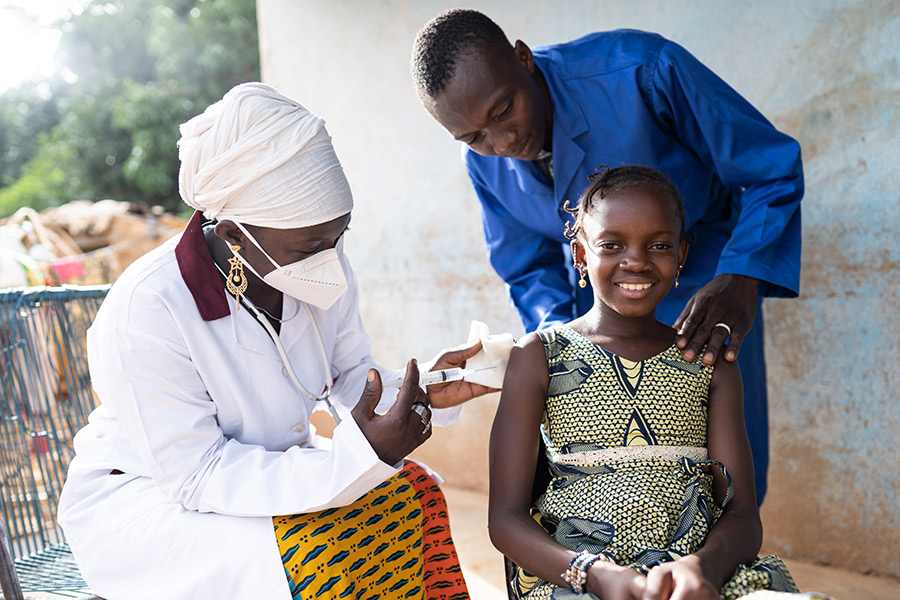 The immune system provides a formidable defence against pathogens. However, many bacteria possess a protective sugar polymer coat. In children, the immune system does not respond to these polymers unless they are chemically linked to a carrier. This is the basis of conjugate vaccines, a powerful but expensive means to fight diseases like pneumonia, the leading cause of death in the under-fives. Andrew Lees, CEO of Fina Biosolutions and adjunct professor at the University of Maryland, USA, has developed a simple yet efficient approach to synthesise conjugate vaccines. Together with a ‘not-for-much profit’ model, his innovative technology is accelerating the impact of vaccines, particularly in developing countries.

The body’s resistance to pathogens relies on the immune system: a sophisticated and incredibly complex network of biological processes. It coordinates the fight against viruses, bacteria, parasitic worms, cancer cells, and even foreign objects like wood splinters. The immune system employs an army of antibodies, a large group of Y-shaped proteins that can bind to foreign invaders, marking them for destruction.

An important component of our ‘adaptive’ immune system, antibodies are very specialised, attacking only their specific targets. Over the course of our lives, this adaptive response learns how to recognise dangerous pathogens and how to trigger the biochemical response to kill and eliminate them from our bodies. Human-made vaccines exploit this ability of the immune system to learn from previous fights: they contain an agent that resembles a weakened pathogen, in the form, for instance, of killed microbes, their inactivated toxins, or some of their surface proteins. These agents ‘teach’ the body how to respond to the threats posed by the natural pathogen. As the protective component has become better defined, more purified components (antigens) are used for vaccines. However, some antigens will not induce an antibody response unless they are chemically linked (conjugated) to a protein, which serves as the ‘carrier’. Immunisation with the conjugate vaccine will cause the body to make antibodies to the antigen.

Several bacteria that cause invasive diseases have evolved the ability to protect themselves from a host’s immune system by shrouding their cell membranes with a protective layer of polysaccharides. These molecules, known as capsular polysaccharides, are composed of long chains of carbohydrate (sugar) repeat units, forming layers of polydisperse polymers covering the surface of the bacteria. They are found, for instance, on pneumococcal bacteria (also known as Streptococcus pneumoniae), which are responsible for community-acquired pneumonia and meningitis in children and the elderly.

More than 90 different varieties of pneumococci are known, each exhibiting a chemically distinct capsular polysaccharide. The capsule-specific antibodies can help protect humans against diseases caused by pneumococci. However, the ability of the body to produce these antibodies matures only with age. For this reason, unlike adults, children can be very vulnerable to bacterial diseases caused by encapsulated pathogens, like pneumococci.

Young children can be very vulnerable to bacterial diseases caused by encapsulated pathogens, like pneumococci.

More than 70 years ago, it was found that purified high-molecular-mass polysaccharides from pneumococci induce specific antibodies in adults, promoting resistance to the diseases caused by this class of bacteria. In children, however, this approach failed to elicit an immune response. It was later found that by conjugating the polysaccharides with a protein carrier, the conjugate would now induce an antibody response to the polysaccharide in children.

The first approved and marketed example of this conjugation chemistry was a vaccine against Haemophilus influenzae b (Hib), a bacterium responsible for childhood meningitis, pneumonia, and epiglottitis, which, before the introduction of the vaccine in the 1980s, was estimated to be responsible for 20,000 cases in the USA alone. The vaccine reduced the incidence of the disease by more than 99%. 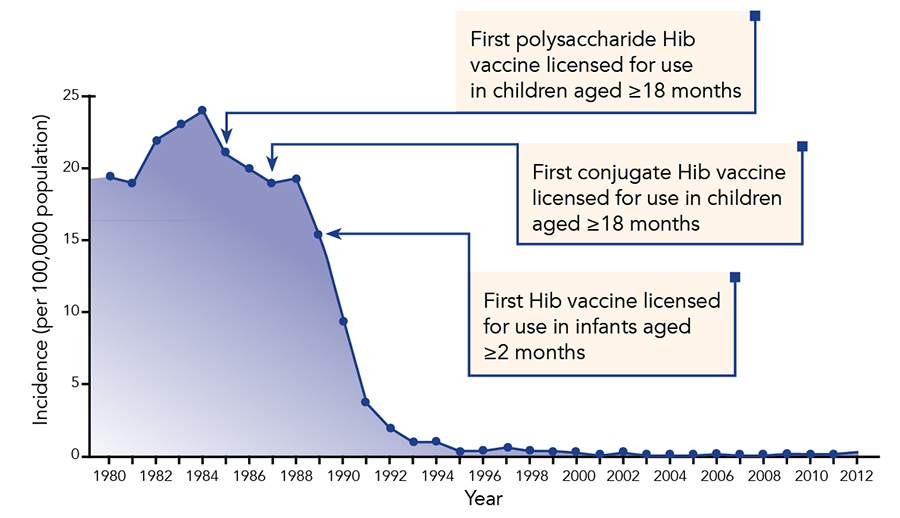 CDAP: A breakthrough in conjugation chemistry

Conjugate vaccines have been developed to fight some of the most devastating paediatric diseases worldwide, including, in addition to Hib, those caused by Streptococcus pneumoniae, Salmonella typhi, and Neisseria meningitidis. Creating conjugate vaccines, however, requires complex multi-step chemical processes. This makes them some of the most expensive and complicated vaccines in existence. The high cost of conjugate vaccines can limit their use, especially in those cases where they would be most required, like mass vaccinations of young children in developing countries.

Andrew Lees, CEO of Fina Biosolutions and adjunct professor at the University of Maryland, USA, has developed an innovative approach that simplifies the complex chemistry of polysaccharide-protein conjugation. The crux of his technology is the use of a chemical called CDAP. ‘Most polysaccharides’, explains Lees, ‘lack a convenient chemical “handle” to attach proteins. CDAP activates the polysaccharide and allows the protein to be directly linked to it. Compared with other conjugation approaches, CDAP technology is simpler and more efficient.’

Lees’ approach to conjugation chemistry is used in several vaccines marketed by the major multinational pharmaceutical company GlaxoSmithKline. These vaccines include Synflorix®, a vaccine for Streptococcus pneumoniae, and Nimenrix®, a vaccine for meningococcal disease. In 2006, Lees started his own company, Fina Biosolutions, whose work is devoted to developing affordable conjugate vaccines. The radically new business model adopted in this venture is one of the keys to its success. ‘Without an outside investor,’ says Lees, ‘we do not need to make money for others. Instead, we need only to earn enough to be a sustainable company. This “not-for-much profit” model has allowed us to provide our technology at as low a price as possible, rather than as high as we could get away with.’

The cost of the protein linked to a capsular polysaccharide in a conjugate vaccine can be a significant part of the vaccine’s cost. Currently, only a few proteins have been licensed for this use. Fina Biosolutions has developed a low-cost version of one of these proteins, CRM197, a genetically detoxified diphtheria toxin. Scientists at Fina Biosolutions developed a unique strain of E. coli, a bacterium commonly used in biotechnology, whose cytoplasm is modified to act as an oxidative environment. This method makes it possible to produce proteins containing disulphide (S-S) bonds, like CRM197, within the E. coli cytoplasm. These modified bacteria were found to grow extraordinarily well, allowing the production of large amounts of CRM197. Many other proteins, which were not previously synthesised by E. coli, were also found to be produced in the interior of the bacterium in a soluble and properly folded form.

Lees has developed an innovative approach that simplifies the complex chemistry of polysaccharide-protein conjugation.

Fina Biosolutions is also partnering with international organisations around the globe. The company has licensed its chemistry to the Serum Institute of India (SIIPL), the largest vaccine manufacturer in the world by dose, for producing conjugate vaccines for S. pneumonia and meningococcal disease. It is estimated that roughly 400,000 children under the age of five die each year by diseases caused by Streptococcus pneumoniae, primarily due to pneumonia. The conjugate vaccine for pneumonia produced by SIIPL using Lees’ chemistry is made available to low-income (global vaccine alliance GAVI) countries at a cost of only $2 per dose, about one-third lower than the cost of vaccines supplied by Western pharmaceutical companies.

The bioengineered E. coli approach developed by Fina Biosolutions for the production of CRM197 has also been licensed to PATH, a US-based global-health non-profit organisation, for royalty-free use in GAVI countries. The innovative approaches to conjugation chemistry and low-cost CRM197 developed by Fina Biosolutions are being used by a number of companies around the world to make more conjugate vaccines more affordable.

Lees and his team at Fina Biosolutions have been working more than 15 years to provide innovative approaches to vaccine development and to establish collaborations worldwide that maximise the impact of these advances, particularly in developing countries. Lees is also collaborating with the Center for Vaccine Development at the University of Maryland in Baltimore to develop conjugate vaccines for non-typhi Salmonella, which causes diarrheal diseases in children and represents the second major cause of death worldwide for children under five. The field of conjugate vaccines is flourishing. Many new conjugate vaccines are being developed for various indications, from malaria to cancer. Although originally developed more than 25 years ago, Lees and Fina Biosolutions are continuing to refine CDAP chemistry to make it simpler to use, more efficient and importantly – more accessible.

Was there a moment in your career when you realised that your scientific expertise was going to lead to a radically new approach to producing efficient and affordable life-saving vaccines?

The realisation of CDAP chemistry was a true scientific ‘eureka’ moment. One night, alone in the lab, I activated a polysaccharide with CDAP and added the protein, instantly forming a gel. I told my wife that I thought I had done something important. Although it took many more months to develop the chemistry where it was useful for conjugate vaccines and many years of effort to prove its value, that moment in the lab changed my life by giving my work a focus and purpose. I am proud to know that the chemistry I developed is used in vaccines that have saved tens of thousands of lives.